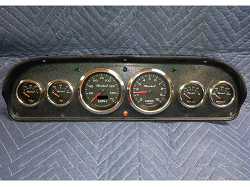 The story behind its making:

If the old saying that "necessity is the mother of invention" then this 6 gauge instrument bezel for the Ford F100 (and larger) Fridge era Ford F100 pickup trucks is no exception.  While my son and I were rebuilding our '57, I wanted to add a tachometer (much like I did in the '66 Mustang GT) but the available products were not good enough.  Primarily, they didn't have the stock look I wanted yet provide for modern improvements that I needed.

For me, the biggest issue was how these other instrument cluster products for our F-100 pickup trucks just didn't look like they belonged there when compared to the original steel dash.  The first thing I did was purchase an aluminum insert that would hold all six gauges but would require me to literally destroy my perfectly good steel instrument panel to accommodate the new gauges. Why on earth would I want to destroy one of the few parts on this old gal that was in perfect condition? Although the quality of the billet aluminum panel insert was excellent, it did not seem like a viable solution given the cost of this insert was upwards of $150.00 and I still needed to destroy a perfectly good steel instrument panel.

Additionally, I'd have to spend a bit more for some cheap LED lights to install (note the little round holes above) if I wanted turn signals or high beam indicator lamps... not in my truck!  I resold that insert on the famous auction site and looked for a better solution.

I then stumbled upon an instrument panel made by classic dash.  At first glance the unit looked like a suitable alternative but upon more research and scrutiny, I found what many experience after purchasing a house, that it isn't until after you move in do you see all the things you didn't see.  The first thing that stuck out to me was the position of the minor gauges.  They were staggered and distracting for me and didn't flow nicely.  If we weren't going to have the minor gauges stacked like the original to accommodate the tach, then they should at least not look like they were spattered onto the panel.  I called the company who manufactures these (in Nevada) and asked them if they could sell me blanks?  Dash panels that did not have the holes cut into them and they declined to do so.  Initially that would have been the easy solution.  I've been making 6 gauge bezels for 65 and 66 mustangs since 2013 so I knew for sure they would easily fit if all arranged horizontally.  Beast the heck out of me why they didn't offer this.

Well, if it was only the positioning of the gauges that was the default, I might have stopped there and settled on using their instrument panel.  However, upon closer inspection, I noticed that the lower edge of their instrument panel was quite larger than the steel panel and the holes for the mounting screws were right up against that thicker lip. 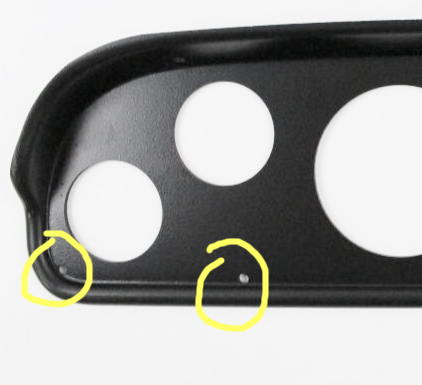 Although made from good quality ABS, I think they didn't take into consideration the thickness of the ABS in relation to the positioning of the details on the original bezel... much like they used an original to mold the copy.  Although this will produce a thermoformed part that looks close to the original, it will not be dimensionally accurate since the ABS plastic is laying over an original, it will be larger.  This is only my theory as to why the lower lip is so large on their ABS formed panel relative to the original as I have no actual knowledge of how they make these panels, only my best guess given my experience in this field.

So even if I could get beyond the position of the gauges and overlook the way the lower mounting screws butt up against the lower lip detail, I could not see spending $150.00 for a panel that not only didn't have the gauges arranged the way I wanted, but required me to spend $30.00 more on "optional" cheap round LED lights (like stuff you would have gotten from radio shack).

So ather than settling for something that did not quite satisfy my desires (especially considering how much money we put into making these old trucks nice), I decided to do what I did with my '66 GT Mustang and design from scratch the bezel I would want in my own truck.

I began this project with one goal in mind... to create a replica of the 1957-196 Ford f100 stamped steel dash.  I began by making a model of the original dash that would allow for 1/16" ABS when formed to make a perfect replica.  All my years of model airplane building (40 years worth) came into play as I made my wooden model which took several months of building and sanding, building and sanding... Once I got the sample form, I created duplicate tools of the wooden model and began production. 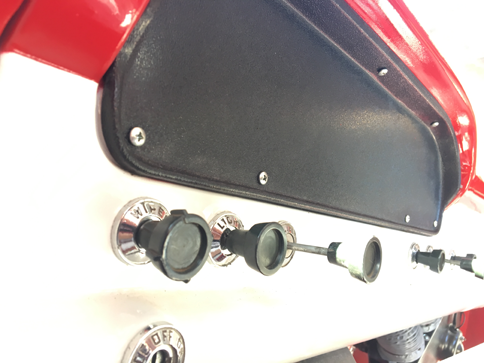 *By the way, even though the competition has declined to do so, I will make y9ou a blank instrument bezel like above if you wish to cut your own holes... seemed like a no-brainer to me!  Click here for more info

I did step up the thickness as 1/16", although worked fine for my own '57, was a bit on the thin side and there was no way I was willing to have anyone feel it was too thin, flimsy or cheap so in increased the thickness by 50% and it made all the difference in weight, feel and sturdiness.  I was amazed that going up in thickness would almost double the cost of the raw plastic... but it was worth it.

Once I had the gauge panel fitting the way I wanted, which meant it had to fit perfectly without the rubber grommet that goes around the stamped steel panel, I went to work on laying out the holes for the 6 gauge set.   I like the pattern we used on our HyePo G2.2 early mustang bezels so I just kept with that theme.  the two larger gauges in the middle and the four minor (two on each side) slightly lower than the center mark.  I tried having all six lined up on the same horizontal line but frankly it was distracting so when I dropped the minor gauges a bit, it felt very natural. 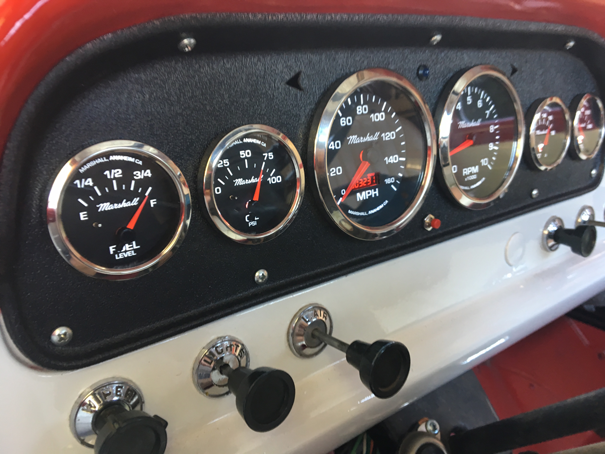 So other than how I arranged the gauges and how the finished part more closely resembled the original in terms of being dimensionally correct, I knew there had to be more to make this bezel better than the competition.  I could have simply stopped there and settled for a bezel that was just a bit better than theirs without doing anything further... but then again, this was going in my truck and I don't like to just settle.

Just like the HyePo Mustang Bezel - which is the only correct and most original looking six gauge bezel made today, I decided that my bezel needed that one thing that would clearly make it stand out from the crowd. And since I am not under any pressure to make stuff for a cheap as possible maximizing profits along the way, I concluded that it was more important to have the right 6 gauge bezel no matter how much more effort went into making it or how much more in cost there was in assembling a finished part... that's what I would do. 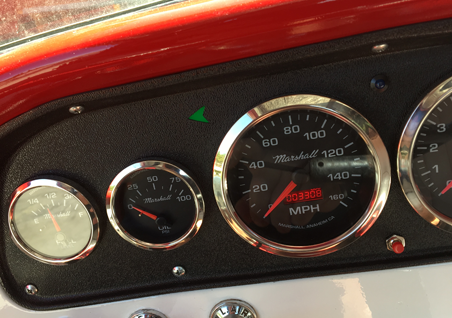 if you look at the image above, you should be able to notice the turn signal arrows on either side of the large gauges... (the high beam sits inconspicuously in the middle).  there is no jig, there is no tool or special laser cutter to make these turn signal arrows. I personally cut each one by hand with a special blade I made for just this purpose.  Additionally, I drew on my CAD program a special holder that I glue onto the back which holds the green lens and the LED bulb socket tube much like the original).  What you get is a 6 gauge bezel that looks like it belonged there and here is the best part.

I could probably get more than my competition for this item... since it is better in several ways.  However, you will notice that the price of my bezel INCLUDING LED turn signal indicator bulbs, socket and lenses as well as the high beam indicator for less than any competitor is selling just their instrument bezel.

I will be happy to make one for you for less than you will pay for one that is a bit lacking and more expensive.  Just click below for more information on this or even a bundled package using Marshall Instruments which are made in Los Angeles Ca. USA .  Only the best and all American Made. 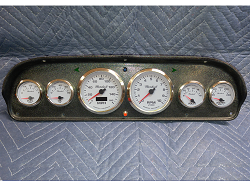